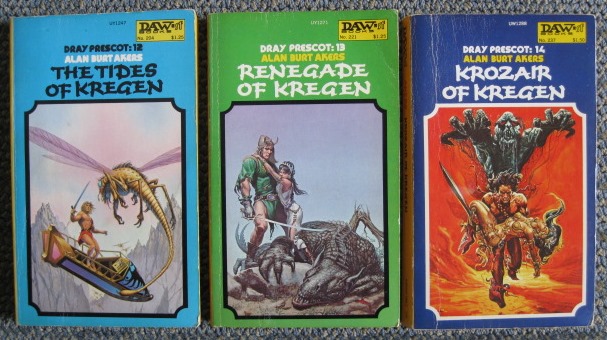 3 volume set - 7" H. 1. Dray Prescot: 12 - The Tides of Kregen, 208 pp - 1976, first printing. 2. Dray Prescot: 13 - Renegade of Kregen, 192 pp - 1976, first printing. 3. Dray Prescot: 14 - Krozair of Kregen, 223 pp - 1977, first printing. "Of all the honors that Dray Prescot, Earthman, had won during his fabulous adventures on Kregen, planet of Antares in Scorpio, none were valued by him more than his membership in the Order of the Krozairs of Zy. The Krozairs were the highest order of chivalry on that turbulent planet, dedicated men, warriors of stern conviction and unflinching hearts. Thus when the Krozairs in their hour of need called on all their far-flung members for aid, he should have come. But he did not. His return had been blocked by the anger of the mysterious Star Lords. Before Prescot could achieve redemption, he had two armies opposed to him, two warring kingdoms naming him outlaw, and only the tides of the seven moons as a weapon." Interiors - light toning to pages ans inside of covers, tiny soft bump at top corner of last few pages of volume 3, otherwise clean and tight with no other ownership marks. Exteriors - books are lightly cocked, light edge wear, very light creases on spines, some soft wrinkling/creasing on covers - more on front cover of volume 3, a few tiny corner creases. 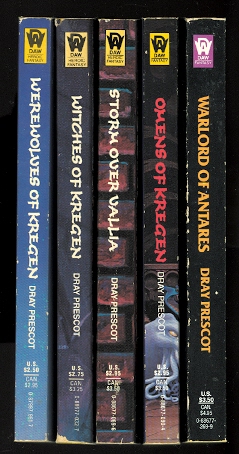 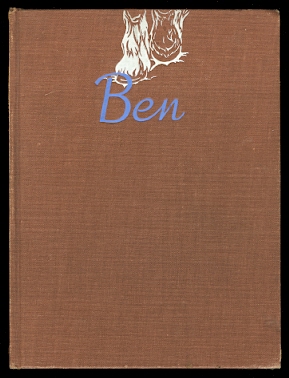 BEN: THE STORY OF A CART-HORSE.